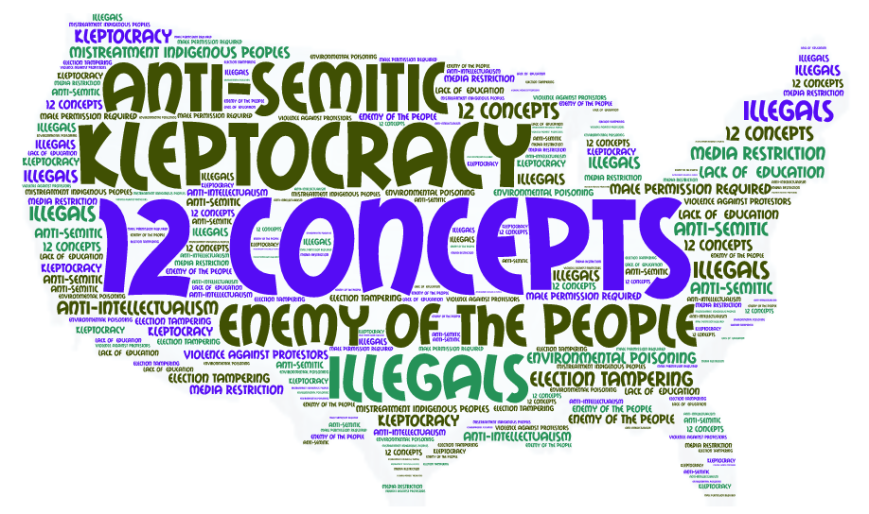 When I taught World Regional Geography, I lectured about concepts relating to politics, environmental issues, genocide, and human rights issues, particularly in Latin America, Africa, and South Asia.  I never dreamed that some of these terms would apply or re-apply themselves to the United States of America (USA) in the early twenty-first century.  But then we experienced a regime change. So, instead of feeling helpless, I made a list of a dozen terms that I believe unfortunately for almost everyone, may now apply to the USA.  I’ve included their historical use in my classes as well as their current application in these “united states”, which seem, to me, are less united than ever.

Secretary of Education, a forced blackout of communication for governmental science groups, and open spoken disdain for intellectuals and scientists.[xii]

Well, there you have my dirty dozen.  I hope these terms will soon cease to apply to any government or any group of people in the world.  I would like nothing better than for these concepts to become mere historical descriptions rather than part of any person’s daily reality.

Hey, a woman can dream…right?

Heidi LaMoreaux has published in a wide variety of genres including short play, creative non-fiction, poetry and scientific journals.  She has a Ph.D. in Physical Geography and is interested in overlaps of academic disciplines, particular science, writing, and art. Heidi has taught courses at The University of Georgia, in The Hutchins School of Liberal Studies at Sonoma State University and at Santa Rosa Junior College.  She is now a Professor Emerita.  For more information see www.innergeographies.com.

Want to Donate to River’s Projects? Click on the Map!